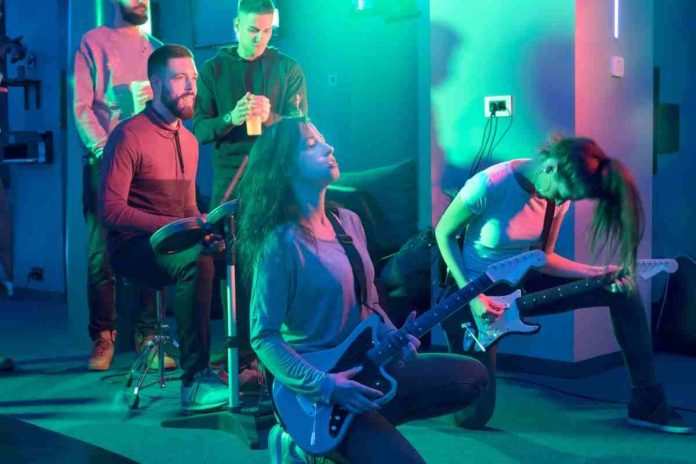 As the popularity of guitar games continues to grow, more and more great titles are being released. If you’re a fan of guitar games, then you’ll want to check out the list of the best ones to play for fun or to learn guitar.

Getting Started With Guitar Games

If you are playing rhythm based guitar games, you will not need an actual instrument. Instead you will use a guitar controller which plugs into your console.

For the other games on our list, you will need a real guitar. Typically you will want to use an electric guitar as it will be easier to get setup with the game vs using an acoustic. If you are unsure of what to look for when picking your first guitar you can find tips here. It will walk you through not only what to look for when choosing a guitar but also offer some suggested models.

Below you will find our top picks for the best rhythm-based guitar games that are perfect for anyone who loves music. They will not teach you to play guitar but they are so fun you won’t be able to put them down.

Guitar Hero is one of the most popular and well-known guitar games available. It’s a great game for beginners as well as experienced players, and it features an expansive song list with a variety of genres to choose from.

Guitar Hero was not the first guitar video game, but it was the most popular. Since its release in 2005, the Guitar Hero franchise has sold over $2 billion in retail sales, making it the most profitable guitar-based gaming series ever. Due to the abundance of guitar-shaped controllers that can be found in pawn shops around the United States, it’s also one of the quickest and simplest targets.

The game has taken on a life of its own as it has evolved through various editions and dozens of expansions. Having said that, Guitar Hero III: Legends of Rock, often regarded as the series’ pinnacle, is the recommended entry point for those new to the series.

Rock Band is another highly popular guitar game that offers an extensive song list with a variety of genres. It’s also a great game for beginners and experienced players alike, and it features a co-operative multiplayer mode that lets you play with friends.

Rock Band was released in 2007 and quickly became one of the most popular guitar games on the market. The game has seen several sequels and expansions, but the original Rock Band is still considered to be the best by many fans.

Little known about Rock Band is that it was actually developed by the same team as Guitar Hero. They pushed the model a step further, allowing players to contribute extra guitars, drums, and keyboards to the mix, in addition to the original one. As a result, the game shifts from a competition to a cooperative effort.

The guitar games below will actually help you learn to play guitar while you are playing the video game.

RockSmith is a guitar game that features a real guitar as the controller. The game comes with an instructional booklet and a USB cable that connects your guitar to your console or PC.

RockSmith is an excellent way to learn how to play guitar, and it’s also a lot of fun. You have the ability to stream and learn with friends. The game includes over 50 songs from a variety of genres, and it also features a multiplayer mode that lets you play with friends.

Fretboard Warrior is a guitar game that is designed to help you learn the fretboard of the guitar. The game features a variety of exercises that will teach you how to find notes on the fretboard, and it also includes a multiplayer mode that makes a fun party.

Fretboard Warrior is an excellent way to learn the fretboard of the guitar, and it’s also a lot of fun. The game includes over 50 exercises, and it also features a multiplayer mode that lets you play with friends.

Guitar Geek is a guitar game that is designed to help you learn the basics of guitar. The game features a variety of exercises that will teach you how to play chords, strumming patterns, and scales.

Guitar Geek is an excellent way to learn the basics of guitar, and it’s also a lot of fun.

Riff Master 2 is a guitar game that is designed to help you learn how to play lead guitar. The game features a variety of exercises that will teach you how to play scales, licks, and riffs.

Riff Master 2 is an excellent way to learn how to play lead guitar. The game includes over 50 exercises, and it also features a multiplayer mode that lets you play with friends.

Can I Really Learn Guitar from a Game?

Yes, you can learn guitar from a game, and there are a few different ways to go about it.

All you need is the game and your guitar. Although it is easiest to use an electric guitar, an acoustic guitar will work as well. If you are new to guitar, you can find the difference between electric and acoustic guitars at this website.

The first way to learn is by using a game that teaches you how to play. There are games available that will teach you the basics of guitar. Some of them are even designed to help you learn lead guitar.

The second way to learn is by using a game that helps you memorize the fretboard. Memorizing the fretboard will help take your playing to the next level.

The third way to learn is by using a game to practice your guitar skills. These games will assist with practicing chords and scales.

The best way to do it is by using a combination of all three methods. Use a game to learn the basics, along with memorize the fretboard and practice your guitar skills.

Guitar games are becoming more and more popular. Some great games available that can actually help you learn to play guitar. So if you’re interested in learning to play guitar, grab your guitar and get ready to rock.